"At least we're not stuck or upside-down"

We'd been running "The Bronconator" for some time. It was Dave's but Andy and I would go wheelin' with him. It was time to find another vehicle and we started looking around for something suitable towards the end of 2005.

We'd set our hearts on a S10 Blazer. Andy knew them inside out and the parts are easy and cheap to get hold of. Unfortunately, the vehicles themselves aren't. We thought getting a vehicle suitable for off-roading and whose next stop would probably be a scrapyard would be easy and cheap to get hold of. It wasn't and I'm sure it's something to do with Indiana. You can find good S10 Blazers online for  around $600 or less all over the country except in Indiana and Illinois. People in these states either want to much, around $4,000 for a vehicle with 250,000 miles on it, or just drive them around till they fall to bits.

On 2nd March 2006, Andy and I went to Luke's place, another friend of ours, who said he had a 1992 Mazda Navajo for sale. I'd never even heard of one of these before but we went to look at it and it was in so good a condition we couldn't pass it up. I drove it the roughly 20 miles back to Terre Haute and whilst we were in Andy's garage we came up with the name "The Ho" for it.

"The Ho" is a 1992 white Mazda Navajo LX, which is basically a rebadged Ford Explorer. It's a two door, 4 litre, 155-horsepower V6, push button 4WD SUV with around 97,800 miles on the clock. I'm sure ours was one of those produced with the optional premium package which included air conditioning, cruise control, sport seats with power lumbar adjustment and a pop-up/removable sunroof. At some time in the vehicle's past someone had put in a CD player.

For $900 we think we got something we could turn into a decent off-road machine. Unlike "The Bronconator" one of our aims is to also keep this vehicle street legal for as long as we can. We don't plan on being anal about it, the vehicle was bought to be used off-road, but we won't be doing things like deliberately driving it into trees or rocks - not for a while anyway. Of course there were some problems with "The Ho". There was some minor damage to the passenger side body sill, Luke said the radiator may need changing and it was leaking a bit of oil. What appeared to be the biggest problem was that when the 4WD button was pressed we could hear the electric relay in the rear of the vehicle clicking but it wouldn't go into four wheel drive.

Some things were done straightaway. The hood liner was removed as was the front valence and mud flaps - these would get torn off pretty quickly anyway. The front indicator lights are in the valence and so at the moment they are held in place on their metal brackets.

Some initial problems for off-roading were identified. The Douglas "Performance GT" tyres need to be replaced by something a bit more rugged. The breather tubes to various parts are too short and need to be lengthened. This is the same for most vehicles that are to be used off-road, the short standard ones will let in mud, sand and gravel. The air intake is in a bad position, being at the front of car, just to the side of the radiator. The first water we come to and we're sure to start sucking it into the engine. One nice thing about the Mazda Navajo is that it's a distributorless ignition system. It uses an Electronic Distributorless Ignition System (EDIS) which should be less prone to water infiltration. 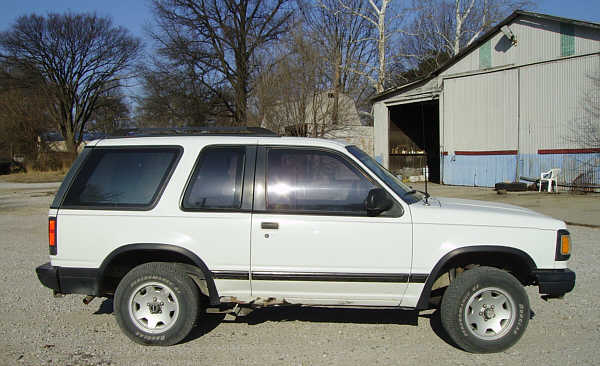 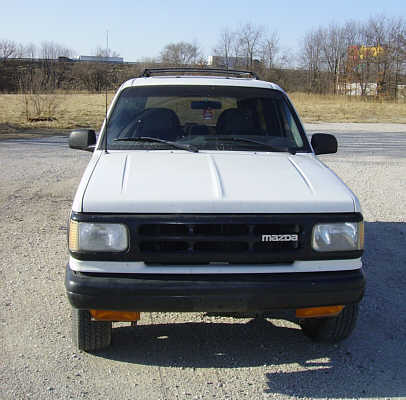 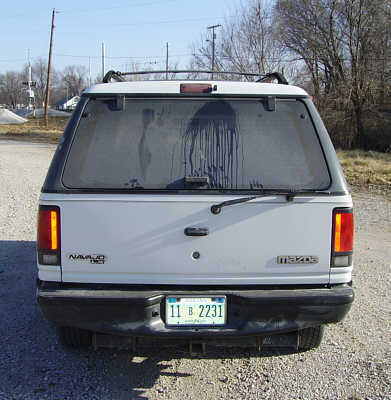 "The Ho", as purchased

"The Ho", the only original body damage

3rd March 2006 - Two 5 foot lengths of 4" x 2" x 3/16" steel rectangular tubes were bought, these cost $76 and will be used as new front and rear bumpers. The air conditioning condenser and accessories were removed. This is because the condenser, which sits in front of the radiator, stops the engine from being cooled efficiently. Because the radiator had to be removed to get the condenser out we also went and changed the thermostat as well.

The best news is that we managed to get the four wheel drive working again. A common problem is that the 4 x 4 shift motor gets dirty or damaged. We found that the problem was that the plastic bushing that is supposed to hit a stop in the four wheel drive electrics had disintegrated. as a result the computer lost track of what ratio the car was supposed to be in and so didn't shift. 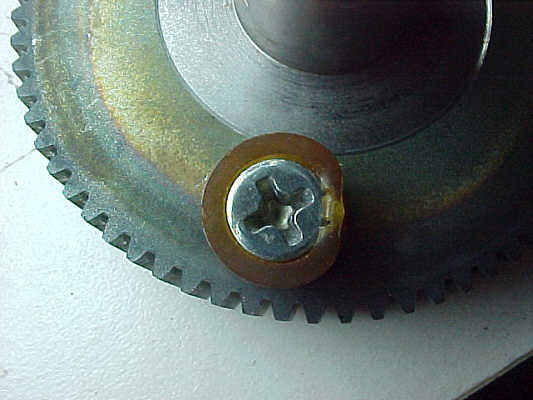 The bushing was replaced with a section of plastic tubing from our "pieces of junk that might be useful one day" collection. It appears to work very well, both 4x4 high and low are now working.

That evening, 3rd March 2006, we took it to the river Bottoms near West Terre Haute. It was a short ride and we weren't too rough on "The Ho", but Andy and I were pleased with the way the car handled.