From around 28th March 2006, "The Ho" has had a problem starting. It will crank and crank but takes a while for it to actually turn over and start. The compression seems fine at 40psi and we can hear the fuel pump in the fuel tank turning but the engine won't start properly. We replaced the fuel filter but that didn't do the trick but we heard something that sounded like air bubbling in the fuel tank so thought maybe that we'd broken the fuel pickup line but we filled the tank with petrol and it's still not starting properly.

A look online shows that some Explorers and Navajo's have this problem but that it's difficult to trace. Suggestion include:-

Air Intake: Removing the rubber tube that runs to the air intake (the one that comes from the air cleaner) and spraying carb. cleaner over it

Fuel Pump Relay: If you don't hear a 2-3 second "whizzing" sound immediately followed by a "click" as soon as you turn your key on, this could be your problem. The relay box is under the hood on the passenger's side. It's a black plastic box with a lid, open it and swap the heater relay with the fuel pump relay (they're the same) and see if it solves the problem. Try grounding the low amp side of the relay from the harness side with a jumper wire. For more on this and the Camshaft Position Sensor (CPS) see About Auto Repair. A new relay costs about $10.

CPS: An intermittent crank position sensor; a wire that's pulling apart inside the insulation and engine torque is breaking the connection.

Fuel Reset Button: Under the passenger side inside floor board. Look for the wires, put your finger in the black part to see if button is up. If it is then press to reset it.

Coolant Sensor: Check the coolant sensor on top front of engine. It tells computer how much fuel to send depending on the engine temperature and can cause the car not to start.

On 5th April 2006, the starter motor was removed and tested. It was filthy, part of the commutator was missing and the contacts were worn away to nothing. A new starter costs around $100 but a remanufactured one was bought on eBay for $60.

The new starter was fitted on 8th April 2006 during a "repair" day. 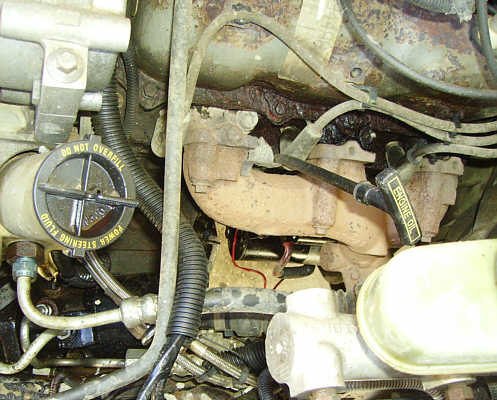 The new starter can be seen just under the exhaust manifold 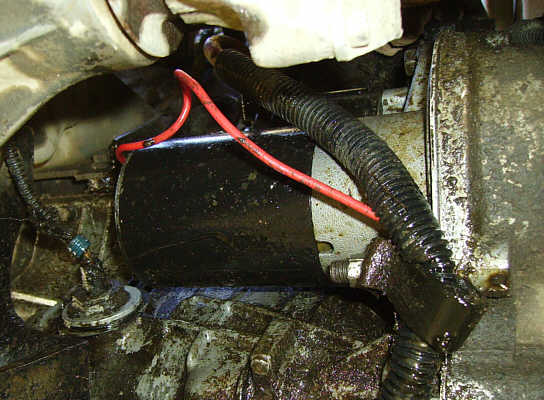 While we were fitting the starter we also decided to see what could be causing the rough idling. We turned out to be lucky as it turned out to be simply dirty contacts on the IAC (Idle Air Control). 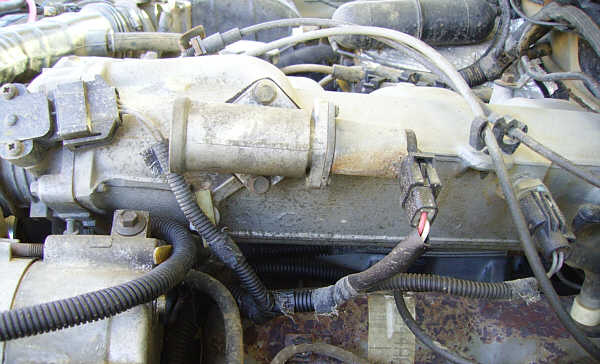 For more information on repairing these see the article "Ford Explorer IAC Fix" on the Ford Truck Enthusiasts site. All we needed to do was clean the electrical contacts. A new IAC costs around $60.

This was to Redbird SRA on 1st April 2006, which was the day they reopened for the season. Dave took the Bronconator and Andy and I took "The Ho". After almost a week of rain Redbird was particularly boggy but being the first day of the season it was also very busy. "The Ho" found it hard going up some of the slopes but coped with most very well. 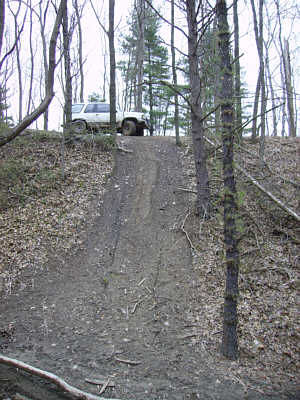 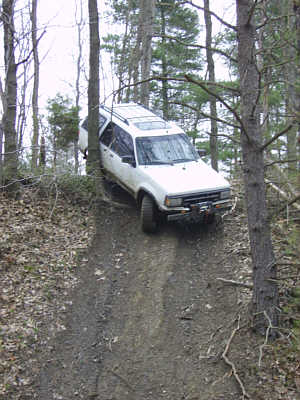 Starting the descent
Another dent in the passenger side bodywork 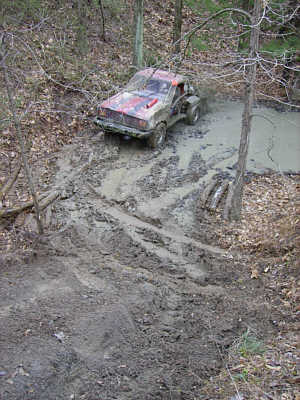 The Bronconator messing around in the mud
The vehicle looks a wreck but it can manage places "The Ho" can't
This isn't one of them. "The Ho" got through this OK, but Dave had to turn around