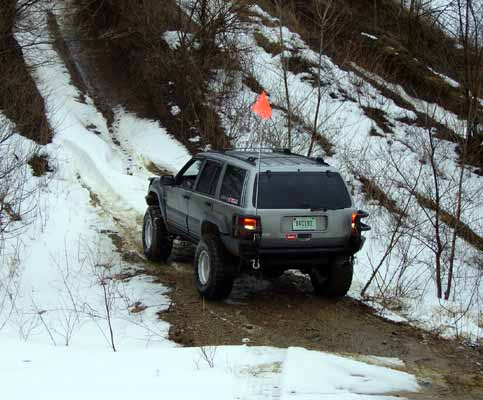 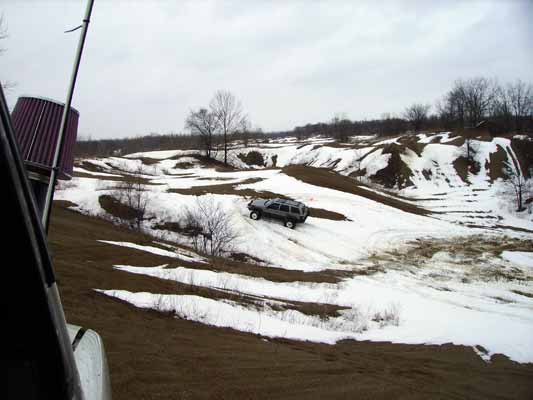 Dave messing around in the snow

It was around this time that we got stuck and Dave decided to get us out of the snow by pushing "The Ho" with his Cherokee. I should have guessed what he was going to do as instead of using something solid he drove the front of his car into one of our headlights. I was pretty annoyed at the time but these things happen. 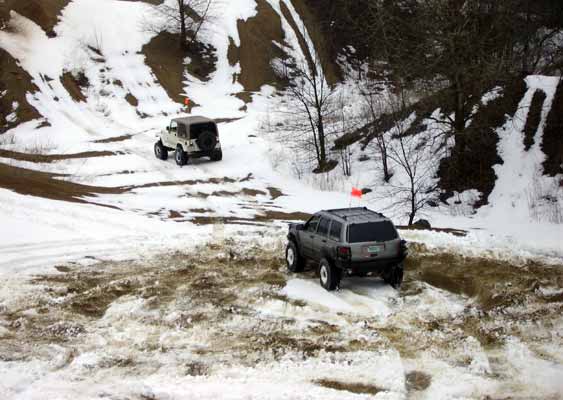 Tristan and Dave playing tag in the snow 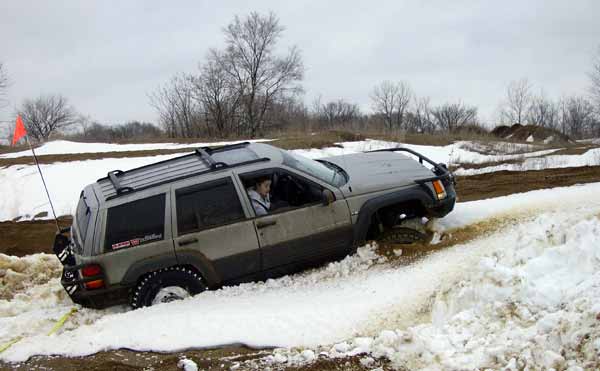 Dave in the snow 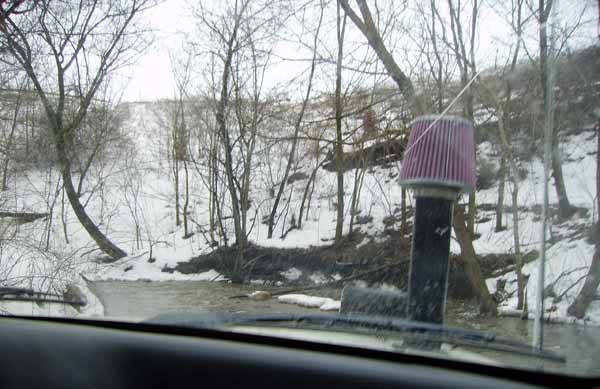 After this point it all gets pretty interesting, unfortunately everyone was a bit too busy to take any photos. Climbing out of this stream Luke was driving and caught the bank at the wrong angle, "The Ho" slid down the bank and rolled over. It was great! Really gentle and no-one or nothing got damaged. Luke was a little worried about the rollover but I thought it was funny as hell.

I was wrong about no photos being taken. In August 2009, Dave sent me some photos that Tristan had taken on his cell phone. 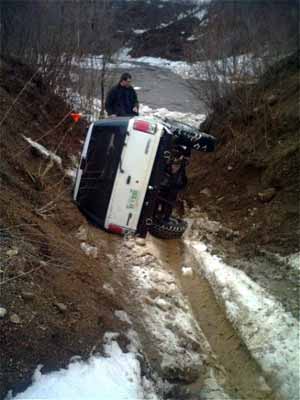 A little while later we were going through the stream, it was well below freezing and there was thick ice on both banks. The Ho quite happily crashing through the ice when it got jammed up between two iced-up banks. It wouldn't go backwards or forwards. Because the stream was filled with the Ho and ice water quickly built up behind it and started to fill it. Neither Jeep could get anywhere near to us because of the trees on the banks. Ice that had been broken off earlier came down the stream and a piece around 10ft long and over a foot thick came drifting down and smashed all the back lights. Trying to get the vehicle out by using the winch rope around a tree simply burnt out the motor. Dave finally got his vehicle into a position where we could attach a snatch rope between the two vehicles and pull the Ho out backwards. That water was freezing and a couple of times I thought I was going to slip and get dragged under the Ho which trying to attach the rope - the attachment points were by now under a couple of feet of freezing water. 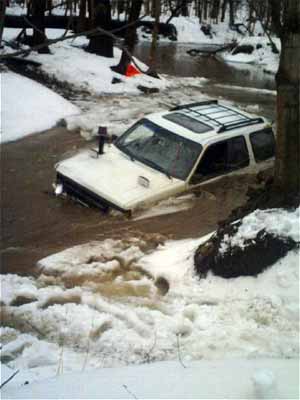 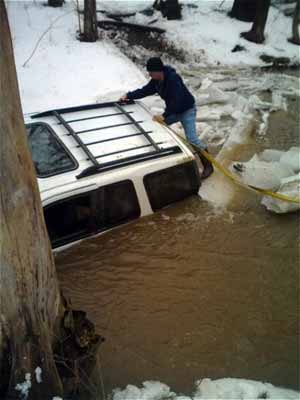 After getting the Ho onto solid ground wasn't the end of the adventure as by now Tristan's Wrangler was stuck in snow. Dave managed to snap his winch rope trying to pull it out. Once on solid ground we checked the Ho and of course both the engine oil and transmission fluid both contained a lot of water. Dave ended up having to tow us all the way back to Terre Haute.

After we got home I drained all the fluids and refilled it. It took around 12 gallons of tranny fluid to flush out the system and I changed the engine oil three times before all the water was out. I thought I'd seriously damaged the transmission as there are water soluble glues used in the clutch system but luckily the Ho seemed as good as ever. Unfortunately my cell phone and camera which I'd left in the Ho were complete write-offs. Luckily I was able to save the images I'd taken earlier that day from the memory card.

Getting a new motor for the winch was a bit of a problem. It was completely burnt out. I asked a local rewinder to see if they could do anything but they couldn't so I ended up emailing MileMarker for a new one. This cost almost as much as the original winch but we dare not go off-roading without one, when you need it - and we do practically everytime we go - those things are worth their weight in gold.

The lights were relatively easy and cheap to fix. I simply went down to rural King and bought more tractor lights. 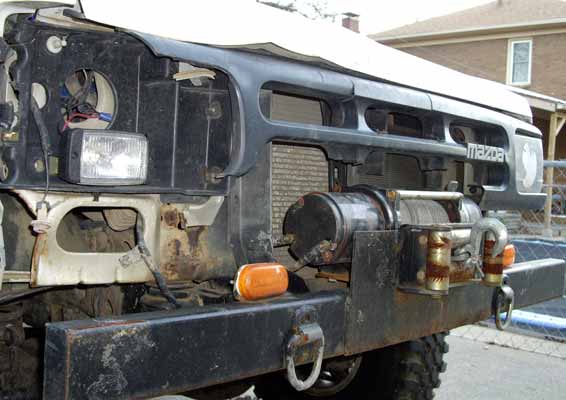 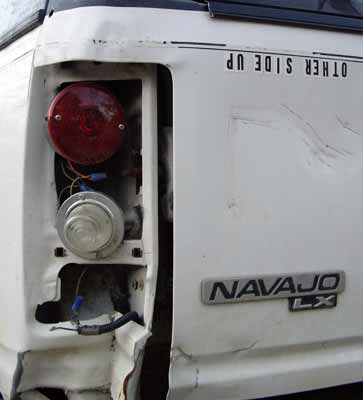 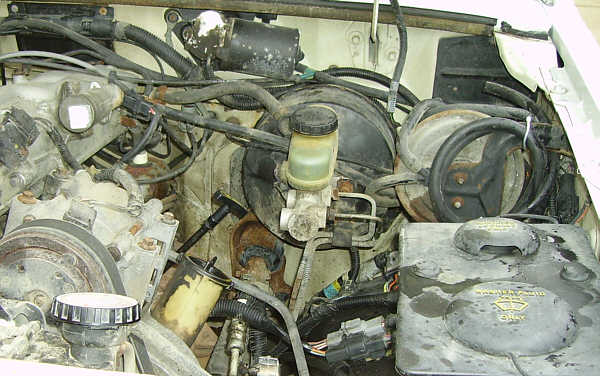 The front differential breather tube (seen on the right of this picture) had been extended in March 2006
now all the breathers were extended and bought through into the vehicle to try and keep water out... 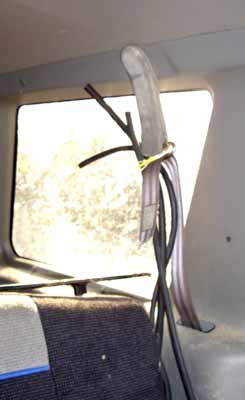 Breather tubes inside the Ho 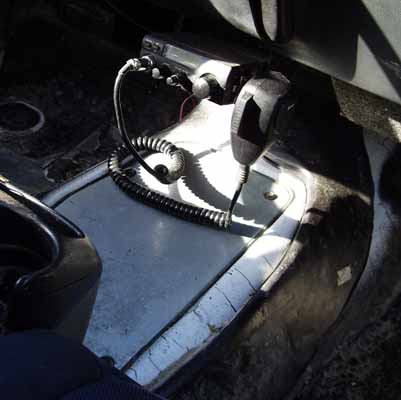 For some reason it took ages for us to figure out how to attach the breather tube to the top of the tranny
Then we realized all we had to do was unscrew this floor plate - duh!